Legendary Skeleton, the army of the Undead, UFOs, Leonard Callahan

Everywhere the light of the blood moon touched.

Sinner's Moon was the 2021 Halloween Event. Delayed after ROBLOX went down for three days prior to Halloween, as well as after scheduling problems and the addition of a major terrain rework, the event started a week late, on November 7th. Named "Sinner's Moon" for the blood moon and the souls of sinners who returned from beyond the grave, the event lasted until November 30th.

Tribal Forest was revamped, with major terrain changes, expansions, and even a new town. Silver Hill was changed to Silver Hills, with Silvertown nestled within, near the new Reservation Camp. A Ruined Fort was added, and Fort Tyler was renamed Ashburn Prison Camp. Towns had less spooky decorations this year, instead having scarecrows wearing pumpkin hats strewn about. A massive ribcage and skull was dropped over much of The Great Desert and the Plantation. Many mines were rebalanced, to go along with the changes to Ore costs and new Ore regeneration timers. During the nights, a blood moon rises, an eerie red settling over the land.

An army of Skeletons used the Gates at the Ancient Descent to enter The Wild West. Back to the land of the living to retrieve their stolen Skeleton Horses, they carried Peacekeeper Revolvers, Winchester Rifles, and a few brought their own special weapons. They wore various combinations of cloak-like ponchos, black Stetsons, and Sombreros. They could be killed to obtain the Joyful Pumpkin, Cursed Lantern, and Piles of Bones. Once enough Piles of Bones were collected, they could be taken to the Descent at the Pinewood Hills Waterfall, and used to enter the Forest of Bones.

The Forest had minor changes from the previous year's event, including the removal of Gerald and Skeleton Horses, and the addition of monstrous rotting Zombie Bears, which dropped their own special pelts, animal meat, bear claws, and the Playful Pumpkin. More Skeletons guarded the Forgotten Sanctuary, and a nasty surprise awaited inside. The Mysterious Notes left behind by the Mysterious Traveler were nowhere to be found.

The Wendigo spawned every night at 6PM and despawned at 6AM if not killed. When killed, the Wendigo had a chance to drop 3 exclusive event items with those being:

The Wendigo Holster was guaranteed to drop every time the Wendigo is killed. The Wendigo Hat was a bit more rare. To get the Wendigo Horse, you must have been the person to deal the last shot to the Wendigo, killing it. However, it only had 25% chance of being obtained.

Once the Wendigo was locked onto you as a target, your screen would have a static overlay. The Wendigo had the ability to teleport. When it teleported, it left a thick black smoke puff at the location it was previously standing at, and the teleportation destination. The Wendigo dealt 80 damage and flung you when it attacked. It could spawn outside the Temple of the Egg, at The Great Desert, Pinewood Hills, the Swamp, or the Tribal Camp.

No notes appear in this event, except for an Easter Egg unrelated to the story.

The Undead Skeletons have entered the West to exact vengeance on the living for the theft of their Skeleton Horses.

A Dagger implied to belong to Leonard Callahan, or one of his family members, can be found dropped from the fight in the Forgotten Sanctuary. Similarly, the fight also drops the Cursed Volcanic Pistol, which deals double damage to the Skeleton NPCs, and glows with flame.

The Wendigo returns once more, and now has a chance to spawn in The Great Desert.

No one quite knows what's going on, but the Laser Cannon dropped by these flying discs is appreciated by Citizens and Outlaws alike. 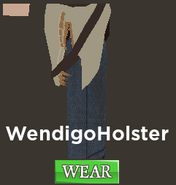 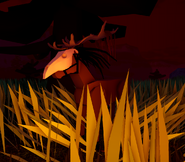 All of the rewards for the event

Community content is available under CC-BY-SA unless otherwise noted.
Advertisement